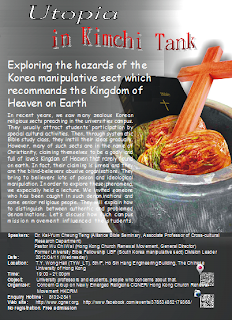 News:
Utopia in Kimchi Tank – Exploring the hazards of the Korea manipulative sect which recommands the Kingdom of Heaven on Earth

Description:
In recent years, we saw many zealous Korean religious sects preaching in the universities campus. They usually attract students’ participation by special cultural activities. Then, through systematic Bible study class, they instill their ideas gradually. However, many of such sects are in the name of Christianity, claiming themselves to be a godly and full of love’s Kingdom of Heaven that rarely found on earth. In fact, their claiming is unreal and they are the blind-believers abusive organisations. They bring to believers lots of poison and ideological manipulation. In order to explore these phenomena, we expecially held a lecture. We invited someone who has been caught in such denominations and some senior religious people. They will explain how to distinguish between authentic and problemed denominations. Let’s discuss how such campus mission movement influenced the students.

Object:
University professors and students, people who concerns about that.